First Sentence:
„He wished he had more time. Although for truth, what would that change?“

Last Sentence:
„Eventually, everything that came to pass was exactly how it was meant to be.“

Synopsis:
John Matthew has come a long way since he was found living among humans, his vampire nature unknown. Taken in by The Brotherhood, no one could guess what his true history was-or his true identity.
Xhex has long steeled herself against the attraction to John Matthew. Until fate intervenes and she discovers that love, like destiny, is inevitable… (Source: goodreads.com)

My thoughts about the book:
I try to stay short with this review of the eighth book and not to start again with my chorus of praise. But to be honest, I’m not able not admire Wards writing style and her creativity and talent. Although this here is already the incredible eighth part and every time when I start to read, I calculate the fact that this time I won’t be inspired like in the other books … but then she surprises me again.
I’ve also liked this book incredibly much and I couldn’t put it aside for just a moment. To my luck it was weekend when I started the book and therefore I could finish it within 1 ½ days and it was first-class!

Although every time it is another rhythm in the books and other feelings are addressed to the readers, and here at the beginning above all desperation, fear and sadness has ruled, it was no second dull or not suitably… everything was as it should be and the end was like I’ve hoped for and expected it, and as usual, just magnificent!
But I don’t want to say more about it because I otherwise I would spoil it for you. 😉

I just say so much that here in this book, we finally got John’s story and now it’s his turn to get what he wants. Though we already know John’s history from the forerunner books, the background from John was differently rolled up again, namely through the story of Darius. Furthermore it was also shown the interlinking between him and Xhex and Thor, though which was a little confusing at the beginning, but at the end the desired ‚Aha‘–effect was given.

In my opinion John’s book was for me one of the saddest, most desperate, but also one of the hottest stories. He and Xhex fit greatly together and I can’t image someone else beside John. They are lovely!
Besides the love story, also the never-ending fight against the Lessening society came to a special highlight and the tension remained always high because of Lash and his doings.

Moreover I also found it interesting how Ward slowly involved the whole story with Payne, up to the time where she left the other side came to this one. And I find her connection with Vishous just brilliant, even though I’ve already known it before. (Because of spoilers in other reviews)

Nonetheless this book still leaves a bitter aftertaste, if I only think of Thor or of the Scribe Virgin. Not because it was badly written or something like that, no… but because I felt too sorry for Thor’s tragedy and also started to feel pity for the Scribe Virgin. I honestly wasn’t a fan of her at the beginning but now I’ve to say that she should get also some good things or nice moments.

What I love so much in all those books in this series is that although the main love story in every book is told till to the end, that there is always a main plot which goes on and tells the story of the fight with the lessening society and how the vampire society is changing and furthermore in every book new subplots appear and form their way in the books with new characters and way and which make me want to read instantly the next book in the row. Therefore I still hope that there will be released many further books.

All in all:
I want to give a recommendation for this book to every Black Dagger Fan and also to those who haven’t started this book yet. Please, just grab the first book (Dark Lover) and start to read this series because you won’t regret it!!

„Some things are destined to be — it just takes us a couple of tries
to get there.“

Xhex: „No, you’ve got it all wrong, John.“ Reading his emotions, she shook her head. „You’re not half the male you could be because of what was done to you. You’re twice what anyone else is because you survived.“

„Some things are destined to be — it just takes us a couple of tries
to get there.“

Xhex: „No, you’ve got it all wrong, John.“ Reading his emotions, she shook her head. „You’re not half the male you could be because of what was done to you. You’re twice what anyone else is because you survived.“

From the series: Black Dagger Brotherhood # 8

.
Here are some different Covers – which one is your favorite?:

Oh god, this time it’s really hard to choose just one, because the English Hardcover just looks awesome and yummy, but I also like the German Covers, especially from Part 1. 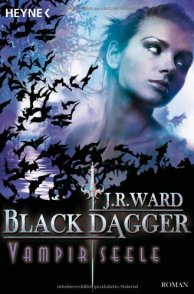 Please note that all rights belong to the author and publisher.